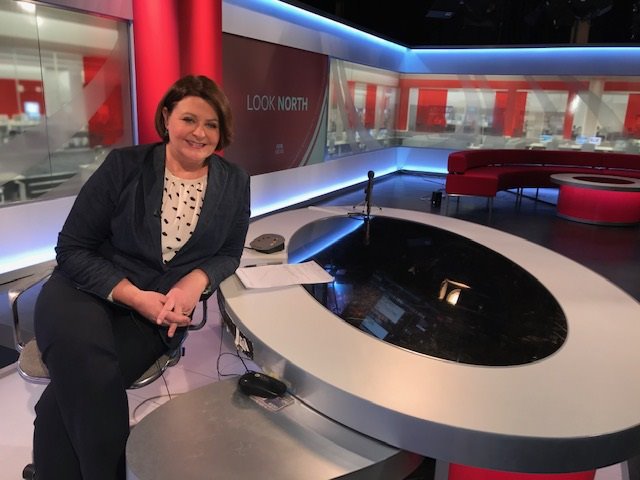 Meet some real-life heroes in my series of special interviews with people who represent the spirit and heart of the North East.

Carol Malia is a broadcaster and journalist from the North East, well-known for presenting BBC’s Look North. She now lives in the Tyne Valley with her family.

In this interview, Carol tells us about presenting Look North, about her must-visit North East shops, and more…

Carol, please tell us a bit about you and your connection with the North East.

My strongest connection to the North East still relates to my formative years as “a coastal kid” having been born in Tynemouth Infirmary (now an estate of new housing) in 1968 and lived in the Cullercoats area until leaving for journalism college at the age of 18. I still love the sea. Even now, I can’t live too far inland as I would feel trapped. At the age of 26 I moved back to Tynemouth from Cumbria, to a Victorian flat overlooking the Longsands and instantly felt I was home again. To me, the 7-second repeat foghorn is a lullaby but to my future husband it was torture! That preceded a move to the Tyne Valley where we have been for 17 years and are now bringing up our two children. I still manage a trip to Tynemouth at least once a week to breathe the salt air and see family. There are memories at every turn; chips on the beach in a cone with my teenage schoolmates, a date with a lifeguard I met at Tynemouth Pool, my first three-point turn in a driving lesson, a snog behind the old Plaza, the housewarming party at my flat attended by new friends at Tyne Tees, side-splitting giggles with my Mum on simple supermarket trips, the pink-fleshed Boxing Day dip with my cousins, it’s all there. My job has taken me to study in Darlington, live in Hartlepool and cover many memorable news stories, from murder cases at Teesside Crown Court to perennial municipal drama involving dog dirt and bin collections. Now, living in Northumberland I feel hefted to the hills, rivers, tea shops and Hadrian’s Wall! I feel so comfortable with having experienced so much of this region, on my days off I feel overwhelmed by the choice of where to go for a walk. A nice dilemma to have.

It really is a blessing to have such a dilemma! We are spoilt for choice in our region. Please tell us about your career as a journalist and your work at BBC Look North.

I’ve been so privileged to have found myself in this line of work. I’ve been a journalist for 32 years in newspapers, radio and TV. The highlights have been many. I do sometimes have to pinch myself at having got here but then I remind myself of those nights sitting in a dim Hartlepool Mail newsroom till midnight banging out 13 pieces of copy on the full council meeting I’d just attended or the days spent knocking on doors asking people to speak about the recent loss of a loved one (which we all hate doing.) I once turned up at one poor family’s home after a car crash had taken their 19-year-old son, before even the Priest. These people were talking to me, a young newspaper reporter, in shock. I’ve never felt proud of that. But there’s plenty to tell my children about, including being there at OBs in the exciting times leading up to the Millennium when Tyneside and beyond was having its Cinderella moment. Jewels such as Sage Gateshead, the Baltic and the blinking eye bridge were shining bright and new and there was a huge buzz. It seems sad to me now, that we’ve lost much of the drive and character that made those things happen. My typical day on Look North involves being in the office, conducting interviews on Zoom or in the studio with our fantastic correspondents. I particularly enjoy cobbling together the late news bulletin and re-cutting items, to keep my journalism skills alive. There is still nothing like that bubble of excitement when a new story comes in and you’re the only one there who can get moving on it. And did I mention the make-up? One question I’m often asked is “who does our hair and make-up” the answer is….in your value for money regional BBC service….us! On my mornings before starting a late shift at 2.30pm, and after dropping the kids at school, I love to walk Bella, my lab/collie cross, and the perfect end is a cup of coffee (ironically, from the Tynemouth Roasting Company) served up at the Larder in Corbridge. Try the filter, it’s amazing. This place serves gorgeously dressed salads and fresh nutritious soup that’s always steaming. It’s my haven before work. I’ve also recently discovered a furniture shop offering something a little different. Jasmine and Lilah is based in an elegant farmhouse in Bywell, near Stocksfield. Each room is dressed in a certain theme to showcase the items. My daughter said she wanted to move in after visiting the adjoining café.

Your job sounds fascinating! Do you have any other favourite shops or businesses you think everyone should know about in the region?

I must mention Forum Books, who, along with Barter Books in Alnwick, have helped me fool my children into thinking a trip to browse for books is actually better than Alton Towers. We’re so keen to see as many of these small businesses survive, we try to shop there whenever we can, ordering online throughout the pandemic too. May I fulfil my BBC requirement of balancing this with “other shops and cafes are available?” Always careful!Â

Great choices! I actually chatted to Helen Stanton from Forum Books as part of this series, too. What about your favourite North-Eastern slang? What does it mean?

My grandfather was born on the banks of the Tyne in Newcastle, as he put it, he could have rolled out of bed and got wet. His mastery of Geordie was poetic. I miss it so much now. He would talk about ‘plodging’ (a paddle in the sea) or getting covered in ‘clarts’ (mud) but my favourite was often said by my mum too but wouldn’t work well today: “ah’ll clack ya ja” roughly meaning ‘I’ll smack you in the face’. If she said it to you, she liked you.

The North East is packed with history, myths and legends, songs and folklore. Do you have a favourite song or verse that you associate with the area?

At our wedding we had two Celtic harpists who travelled up from Wales to play a North East ditty I love (there’s a mash-up if ever there was one.) They played “Weel May the Keelrow” very sweetly and brightly. The sound of it in the grand hall at Matfen will stay with me forever. Interestingly, there’s some dispute over its origins being in Scotland or the North East. That just cements in my mind that we have more in common with our friends over the border than we do in Westminster. It could relate to women yearning for boats to come in at Amble or Crail.

My North East heroes are numerous! The Duchess of Northumberland. She’ll be remembered for making The Alnwick Garden happen, a treasured economic boost.Â  Dame Margaret Barbour, a no-nonsense philanthropist who wisely kept money in the business to grow when, in her words, “men would take it out to spend on yachts in Mont Carlo.” Dr Mohammed Menabawey, who worked at Hartlepool General Hospital in the pioneering field of IVF – helping develop a technique called ICSI to solve male infertility. Alan Shearer, who could have lived anywhere in the world but chooses to keep it real and stay close to his roots. Ann Cleeves, the Vera author. Lord William Armstrong. Inventor, scientist, engineer, philanthropist. Unrivalled intelligence and legacy. Every single person who works flat out providing care, charity and time for people in need – too many to name.

An amazing list of North East heroes there. As a final question, Carol, what makes you smile?

What makes me smile? The rosy glow in my children’s cheeks.

Thank you so much, Carol, for joining me, it was so fascinating to hear about what you do on a daily basis, and what the North East means to you!

Thank you to Kate Baguley for helping to co-ordinating these special interviews.